Research has shown that imbalances in neurotransmitters, especially serotonin, dopamine and/or norepinephrine can cause depression. Specific testing may be used to help determine your exact amino acid needs and/or determine the exact cause(s) of your neurotransmitter imbalances. These tests may include one or more of the following:

This is often referred to as ‘neurotransmitter testing’ although that term does not properly describe the extent of the test.  When amino acids are used to try and correct “neurotransmitter imbalances”, what we are really measuring and trying to optimize are a set of ‘gates’ that are called organic cation transporters (OCTs) that act the same in the brain as they do in the kidney. This simple urine test allows us to measure your unique response to amino acid therapy so that we can customize your amino acids therapy specifically to you. The majority of people with depression (over 80%) don’t require any testing to achieve results; a small minority may require several tests. The beauty of these tests is that they allow us to pinpoint your exact amino acid needs so you can be assured you are getting everything you need and nothing you don’t.

When there is damage to the neurons, a signal is sent throughout the body to all the transporters that tells them to alter the flow or neurotransmitters in a way to try and compensate for the problem. When the damage is minor, the transporters can compensate for neurotransmitter imbalances by utilizing nutrients from a healthy diet. However, when significant damage occurs, properly balanced amino acid therapy needs to be used to correct the problem.

A special transporter called the ‘organic cation transporter (OCT)’ is primarily responsible for the transport of serotonin and the catecholamines (dopamine, norepinephrine, and epinephrine) as well as their amino acid precursors across the cell wall. These transporters are found throughout the body in many tissues, including the kidneys, gut, liver as well as the brain and function similarly in all tissues throughout the body. This means that if we affect change to the OCTs with amino acid therapy it affects all the OCTs throughout the entire body.  This is very important.

When we run a ‘neurotransmitter test’ what we are really doing is determining the functional status of these OCTs in the kidneys in relation to a given amount of amino acids. By giving the body

properly balanced amino acid therapy we can define the exact amounts of neurotransmitters and amino acids needed to restore proper functioning of the OCTs in the kidneys. However, because this also affects the OCTs in all the other tissues, including the brain in exactly the same way, testing the urinary excretion of neurotransmitters while taking a known amount of balanced amino acids allows us to restore proper functioning within the brain. This restores the flow of electricity in the neurons and leads to the relief of symptoms – in this case eliminating the cause of depression.

So what we are really doing is using amino acid therapy to help optimize the function of the OCTs in the neurons to facilitate proper signaling. This is akin to unscrambling the messages so that the brain gets the proper signals. When the signals are no longer crossed, you get your life back.

If this explanation is too much science for you, don’t worry. Amino acid therapy works whether or not you understand why it works. It’s wonderful that way.

The adrenal glands are your ‘fight-or-flight’ organ; basically, they help you respond to stress. However, long periods of excessive stress can diminish the adrenals ability to adapt, which means you won’t cope with stress as well. This makes it much more likely that stress will trigger a depressive episode. Luckily, there is an easy, at-home test that can help us determine how well your adrenals are functioning. This test is only used as needed and most people don’t need to run this test in order to achieve results. However, it’s nice to know that testing is available should we need it so we can find your customized solution by addressing your exact causes of imbalance.

The Many Stages of Adrenal Fatigue

Modern lifestyles produce constant high levels of stress that stimulates the adrenal glands. The impact of chronic stress is that cortisol levels never get a chance to return to normal. Our bodies think that being late for a meeting, getting stuck in traffic, a computer crash or the kids yelling in the back seat is the equivalent of a saber-tooth tiger racing after us. This constant stress causes several detrimental changes in the body that threaten not only your sanity, but your overall health and longevity.

Long periods of chronic stress gradually deplete serotonin as the body tries to down regulate excitatory signals. This can often trigger a depressive episode. Once serotonin is sufficiently depleted, the excitatory arm of the nervous system has free reign, often creating prolonged states of anxiety and agitation or irritability in addition to regular headaches. At this stage, many people describe that they ‘just can’t relax anymore’ and/or they may alternate between depressive and anxious states.

With continued stress, excitatory neurotransmitters also become depleted; this is when the body just can’t keep up anymore and many people struggle just to get up in the morning (or anytime during the day). These people often experience chronic depression or chronic fatigue.

A simple salivary test can help determine how your adrenals are functioning, identify what stage of adrenal fatigue you are in and guide us to the necessary therapies to restore proper adrenal function. This simple, do-at-home test involves taking four salivary samples throughout the day to measure your cortisol and DHEA levels. The results show you exactly where you are along the progression towards adrenal exhaustion. 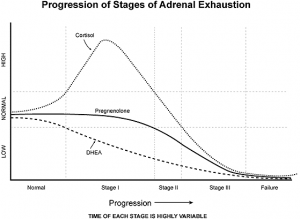 Once we know where you are along this curve we can develop a plan to help support your adrenals, help your body handle stress more effectively and restore optimal functioning over time. 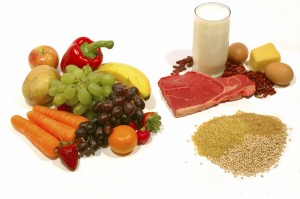 If you have an allergic reaction to a food (or any other allergen) the immune system initiates a complex response that causes a number of significant biochemical changes in your body; this includes alterations in your neurotransmitter levels. Over time, these neurotransmitter fluctuations can lead to episodes of depression that may become chronic.

The immune reactions we are referring to are not the classic IgE mediated reactions some people have that can be life threatening, although these can create massive neurotransmitter imbalances. We are referring to hypersensitivities to foods that are often delayed and much less dramatic; in fact, most people don’t even realize they are experiencing them and/or them may attribute their mild reactions to something else (i.e., a runny nose, increased joint or muscle pain, headache, energy fluctuations, etc.). Although identifying and addressing a person’s food hypersensitivities is not necessary to begin seeing results, it is usually paramount to being able to wean off amino acid therapy over time. Therefore, for most people, we will address this possibility once you have achieved a resolution of your symptoms.

If you’d like to learn more about how certain foods may be causing or exacerbating your depression or about food hypersensitivity testing.